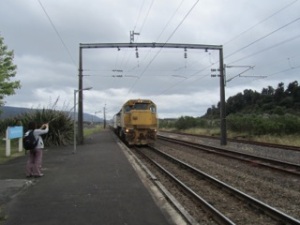 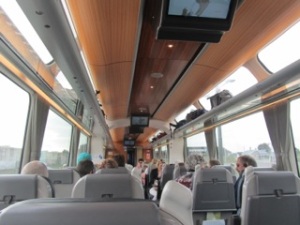 Finally on New Zealand’s North Island and heading down from Auckland to National Park to stay at Chateau Tongariro and walk the Tongariro Alpine Crossing and Mt Ruapehu. Mt Tongariro volcano has erupted twice in the past few months but the track is still open up to the Red Crater although you have to return the same way rather than via the Emerald Lakes, which is closed. Here’s a map and fact sheet for the Tongariro Alpine Crossing which warns you to be prepared for anything. We booked the return train, 3 nights accommodation and 2 walks with Walking Legends as a package through Kiwi Rail.

KiwiRail’s Northern Explorer leaves Auckland at 7.50 a.m. and arrives at National Park about 1.15 pm, taking about 5 hours if it arrives on time before continuing on to Wellington. Having previously enjoyed travelling on both the TranzAlpine from Christchurch to Greymouth and the Coastal Pacific from Christchurch to Picton we were looking forward to another rail journey. Fortunately, the carriages are new and designed for viewing scenery. Best of all there is a viewing car as well as a cafe/buffet car so you can move around. The scenery is mostly undulating hills and farms but it’s great just hurtling along in the viewing carriages. Perhaps there will be scones today? 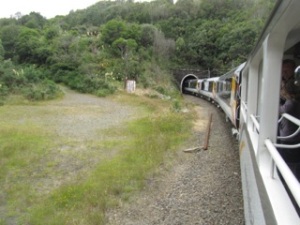 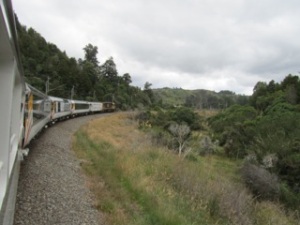 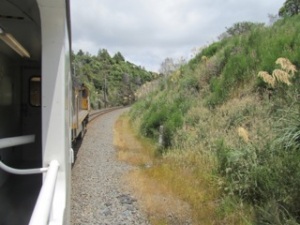 Rail buffs will be interested in the Raurimu Spiral just before National Park Sation. The National Park Village website describes it as being opened in 1908 with ‘Southbound trains from Taumarunui climb 636 metres in only 52 kilometres to National Park, the steepest gradient being 1 in 50, laid out in the form of an ascending spiral, incorporating a complete circle, three horseshoe curves, and two short tunnels’.  Hard to see all that from the train but it does goes round and round. 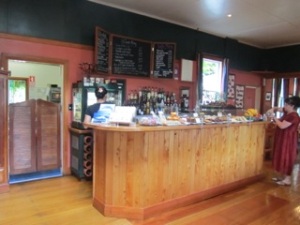 Fortunately, we got another ride through the spiral on our return journey to Auckland. There weren’t any scones on the train but I discovered the delightful Station cafe on National Park Station where the cheerful staff were more than happy to pack a few lemonade scones for the trip. Why not stop there even if you don’t get the train, as these were my favourite scones on the North Island, and well worth a visit (or two).