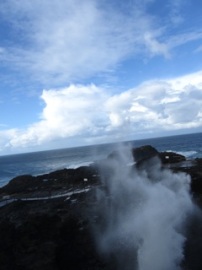 Huge Seas and a freezing, cold gale as we ventured down the winding, mountain road towards Nowra, Berry and  Kiama Blowhole. First, there was the small matter of getting lost in Moss Vale, again. Eventually found the sign miles out of town, but at least it was the right road. Daffodils and Snowbells are already flowering.  The Southern Highlands Tulip Time is September 18 to October 1 this year, if you’d like to visit. Let me know if you find any scone delights. 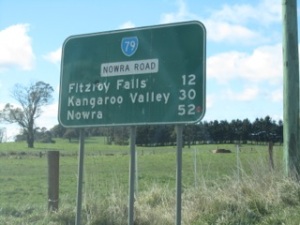 If your in a hurry, don’t take this mountain road, stay on the Illawarra Highway down through Jamberoo and Kiama. Alternatively, it’s a nice circuit for a day’s drive from Moss Vale.  Meandered through the Kangaroo Valley, stopping briefly at the 1898 Hampden Suspension Bridge, followed by another winding mountain road to Berry. 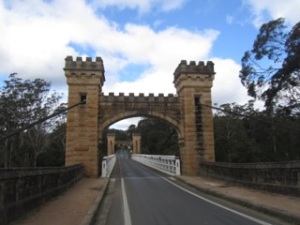 Along the way, I spied the road to  Cambewarra Lookout and Tea Rooms but the ominous clouds forced me ever onwards, but not upwards. Another time, perhaps.  Berry was always a family favourite.  A stop for pies at the Original Berry Bakery was Non-Negotiable. There’s an excellent, little park to stretch your legs and bring out the tea thermos. Today, I was coming down from the mountains and straight out to the beach at Shoalhaven Heads. The really bracing, sea air signalled it was time to head up to Kiama. 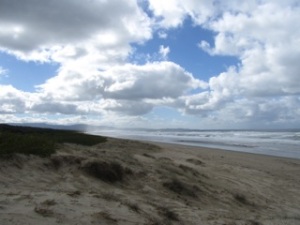 Kiama is another family favourite. If you like the exhilaration of strong winds, powerful ocean surges and freezing water, even in summer, this is the place to come. Found an App for Kiama by Pack 2 Go but no amazing deals so far. 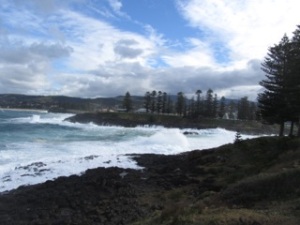 The days of the Blowhole Caravan Park are gone. Nothing like experiencing an electrical storm through a tent! Nowdays, the tents and caravans here have been replaced by Kiama Harbour Cabins.  Likewise, the camping spots on top of the cliff at the Surfside Holiday Park have been replaced by cabins, but there’s still tent and caravan sites.  By the Blowhole the Lighthouse still operates night after night . . . . . . . 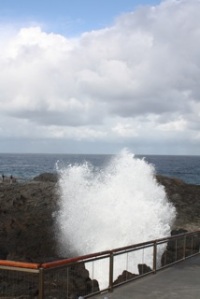 Armed with only a camera (or two) and a cappuccino, I succumbed to the lure of the pounding surf and the explosive Blowhole. At the lower lookout unwary visitors are lured in and suffer a drenching, in the name of photography, much to the amusement of those on the lookout above, who have been known to suffer a similar fate at times. 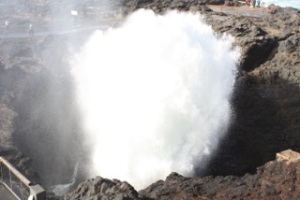 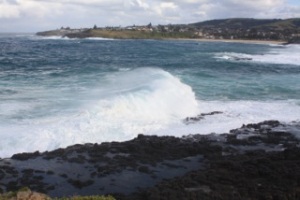 The Light seems to be fading but it’s an enticing twilight with the moon, the lighthouse’s intermittent flashing and the sounds of the wind and ocean by night. 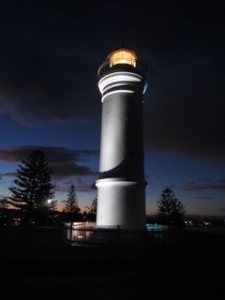