The Maheno has been slowly rusting away on the shores of Fraser Island since 1935. She was being towed to Japan for scrap and came adrift. Nobody wanted to pay to salvage her so she was left on the beach and waited for time to do it’s work. The picture above shows her being built in Scotland  in 1905. Old wrecks often become tourist attractions, but I wonder if such a simple (=cheap) solution would be allowed nowadays.

Now, imagine one of those annoying photographers who wait for ages to catch the wave just as it breaks. That’s me, I just love that beautiful blue sky. 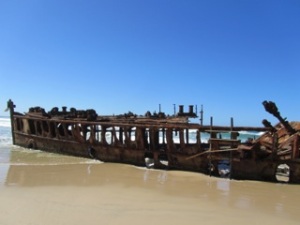 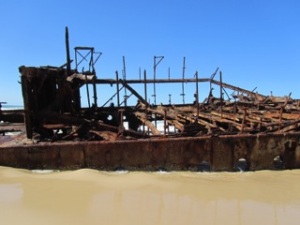 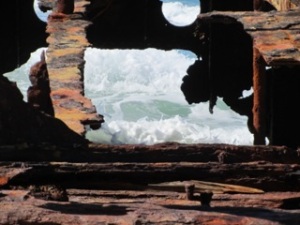 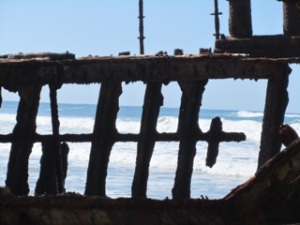 The National Library of Australia has some old images and newspapers about the wreck (1935) and her subsequent abondonment (1936).  The Historic Shipwrecks Program has a photography competition and a database of shipwrecks, including the Maheno. The Maheno was even used for special commando training in WW2! This blog has lots of history, old images and details if your interested.

In it’s heyday, the Maheno must have seen lots of good times, love and laughter, and served a lot of scones in those first halcyon days as a luxury liner!